If you have ever thought guinea pigs were cute, wait till you see a baby guinea pig! One of the most precious creatures you could come across; these little things will steal your heart.

They belong to a tranche of the rodent family called ‘Caviidae‘ and are also known as ‘cavies.’ They have ears and legs longer than their bodies.

However, you need to understand that guinea pigs are social creatures, so they are the happiest when they are in pairs or in a group. For this reason, it is necessary to know how to identify the gender of the guinea pig so that you can put two cavies of the same gender together.

Many people ask the question, how can you tell the gender of a baby guinea pig? Well, there are three ways to identify their gender—through their genitals, by their size and weight, and by taking them to an experienced vet.

Let’s explore these methods in more detail below.

How To Tell The Gender Of A Baby Guinea Pig?

Firstly, you should start by looking for your baby guinea pig’s anus, which is a vertical opening that is usually gray or brown. The location of the anus is underneath the guinea pig’s genitals.

Once you have distinguished between the guinea pig’s anus and the genitalia, you need to look at the distance between them. 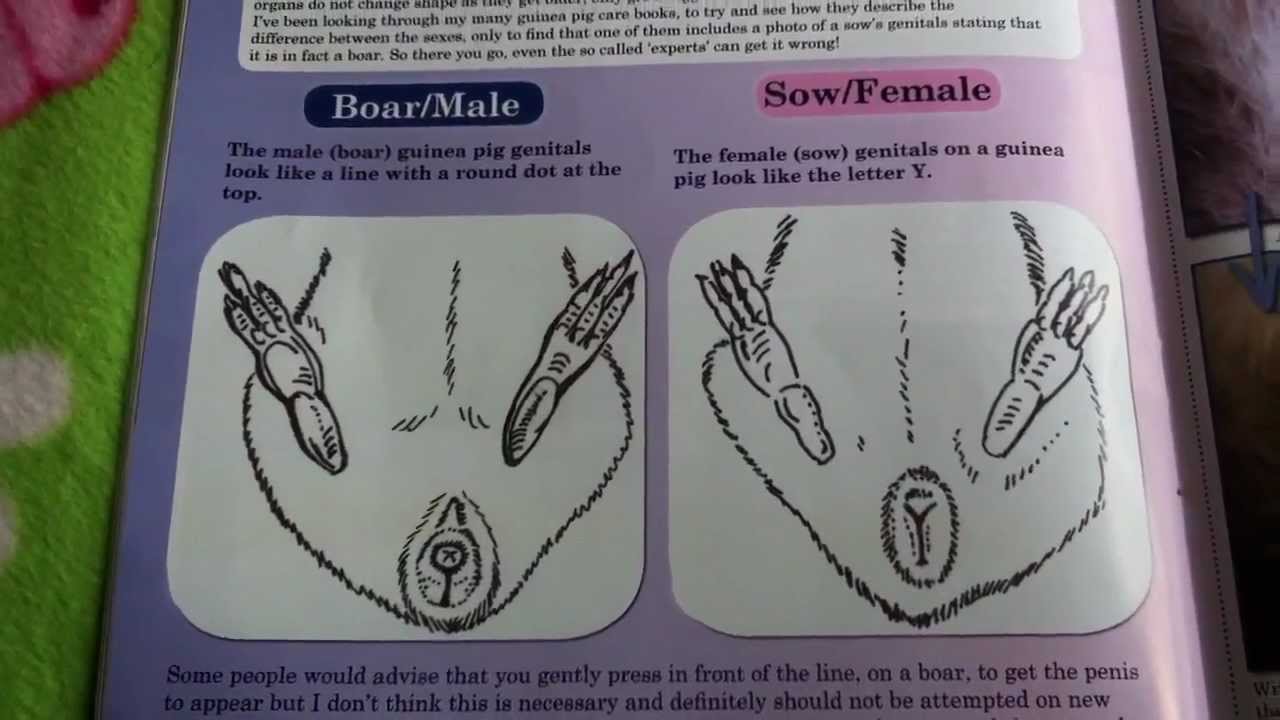 Male baby guinea pigs have around two to three inches of space between their penis and their anus. The shape of their genital opening is a small, circular dot. Their penis usually rises above the level of the skin around it.

Male guinea pigs have a bulge, which appears due to the guinea pig’s testicles. To identify if your guinea pig is a male, check for a circular shape around the baby guinea pig’s anus. This is where its testicles will sit.

If you still can’t figure out your little baby guinea pig’s gender, you need to check for a penis by pressing above the genital area. Sometimes it can be tricky to see the penis, especially in heavy older male cavies, but you don’t need to worry about this in your baby guinea pig.

You should also look and feel for testicles on either side of the penis to confirm that the baby guinea pig is a male. The testicles are usually large compared to the size of the pig’s body.

Furthermore, according to Dr. Dharshinee Rajkumar from Greencross Vets Box Hill, the genital area of a baby male guinea pig resembles an ‘i’ shape, so it is easier to identify.

There is a shorter amount of space between a baby guinea pigs’ anus and vulva. In female guinea pigs, the vulva is usually above the anus. There is a smooth swelling over the genital area.

Using your fingers, you can part the genital opening gently. If the genital area forms a “Y” shape, this means the baby guinea pig is female.

According to Dr. Rajkumar, a female guinea pig can look like a male because of swelling in the area where the penis usually is. In such cases, gently partying the opening can reveal a ‘Y’ shape in a female baby guinea pig.

Through Their Size and Weight

Another way to tell the gender of a baby guinea pig is through its size and weight.

When it comes to their weight, baby guinea pigs initially weigh around 60 to 120 grams, depending on how many guinea pigs the mother produced in the litter.

As they pass their growth stage, they gain about 30 to 50 grams per week.

When they are about to reach adulthood, around 12 months from birth, their weight gain slowly declines. During this time period, male guinea pigs gain more weight than female guinea pigs.

Taking Your Baby Guinea Pig to a Vet

It can be notoriously complex to find out your baby guinea pig’s gender at home just by looking and touching. The creatures are quite small, which makes it harder to reveal their gender.

If you have tried everything and are still unsure of the gender, you may want to take the baby guinea pig to a licensed vet. Your baby guinea pig can stress out during the examination, making it harder for the vet to identify its gender.

What Precautions Should You Take During Gender Identification?

You should handle your baby guinea pigs delicately. If your pet feels that it is going to get hurt, it might try to run away.

You must conduct your examination on a low surface and use the assistance of a family member or a friend in the process.

You must keep a soft towel under your baby guinea pig and wear gloves during the process, preferably disposable ones to avoid any contagious diseases.

Should You De-Sex your Baby Guinea Pig?

Female guinea pigs can become pregnant when they are 4 weeks old. This makes it very important to identify the gender of your guinea pigs to avoid unexpected pregnancies.

If you do not take care of this situation, they can produce up to eight cavies in a litter. This can cause a lot of hassle for you as you’ll have to take care of so many baby guinea pigs as well as help the mother guinea pig recover from the child birthing experience.

Gender identification in guinea pigs can be a difficult task, especially when it comes to baby guinea pigs. However, with the right amount of research and clear guidelines about the process, you can tell the gender of your baby guinea pig at home.

If you’re unsuccessful, you can always take your furry, little friend to the vet for a better examination.

Is a Male Baby Guinea Pig Better Than a Female Baby Guinea Pig? If you plan on getting a single baby guinea pig as a pet, it doesn’t really matter which gender you choose. Your little friend must only be healthy, friendly, and should not appear aggressive. However, if you are getting more than one baby guinea pig, you need to think about how you will house them and decide to de-sex them accordingly.

Do Female Guinea Pigs Have Periods? Unlike humans, female guinea pigs have an estrous or heat cycle rather than a menstruation cycle. During this period, they allow mating and are fertile for 6 to 11 hours. However, any blood discharge is not common, and you need to take your pet to the vet immediately if that happens.

How to Hand-Rear Baby Guinea Pigs?